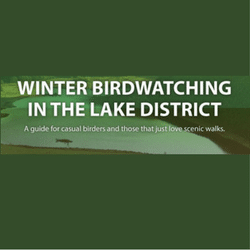 We are lucky enough to have many birdwatchers stay with us at Craig Manor. So, this winter we decided to put together this guide to some of the best birdwatching spots in the Lake District.
We start at Winderemere, which isn’t far from Craig Manor and is a great place to see birds all year round. Wintering Goldeneye join Great Crested Grebes and Red-Breasted Merganser’s on the lake. In fact, the number of waterfowl on Lake Windermere doubles over the winter.

Dramatic Haweswater Nature Reserve is a fantastic place to go for walks and see wildlife. One of the most impressive, and nosiest, sites in winter is the roosting of thousands of Common Gulls on the reservoir.
For those of you that prefer forests, you can try Grizedale forest park. Grizdale is is the Lake District’s largest forest and lies between Coniston Water and Esthwaite Water. Winter is a great time to spot some of Grizdale’s smaller, more colourful residents, such as Siskin and Hawfinch.

If you want to see Redwing and Fieldfare, Cogra Moss is definitely worth visiting. They visit Cogra to escape harsh northern winters. We’ve been a bit cheeky and included Leighton Moss. It’s not technically in the Lake District, but as it’s a real birdwatching hotspot and only a 60 mile drive from Coniston we thought it worth mentioning. Here you can see one of nature’s most dramatic displays, a mass starling murmeration.

Photographs used under CC, courtesy of (in order of appearance)