Artisan Local Food and Drink Options in the Lakes 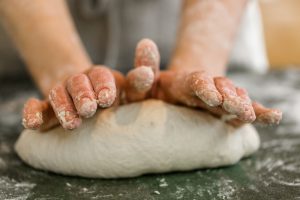 You probably know all about the incredible landscapes that the Lake District has to offer, but did you know that the region is also home to a fantastic food and drink scene, with scores of artisan bakers, chocolatiers, brewers and more taking inspiration from the natural beauty of the Lakes, to make some amazing produce.

If you like to sample some of the finest local produce when you’re away, then you’re in for a treat in the Lake District. Here are some of our favourite artisan food and drink options in the local area.

The area’s most famous bakery has to be the renowned Grasmere Gingerbread Shop, which has been working to Sarah Nelson’s original gingerbread recipe since 1854 and is still regarded as the best gingerbread in the world.

However, there are plenty of other family bakers to check out in the area, such as Bryson’s of Keswick, Ginger Bakers in Kendal and Country Fare in Kirkby Stephen.

The area has recently produced a number of award-winning craft breweries and distilleries, making use of the fresh, clean water in the area.

The Lakes Distillery is one of the area’s big success stories from recent years, beginning with whisky, but now also producing gin and vodka too.

There’s also the Hawkshead Brewery, who brew a selection of beers, ales, IPAs, lager and more in Staveley. You can also visit their Beer Hall which often hosts beers festivals, gigs and other events too.

The Hawkshead Relish Company produce an award-winning selection of over 100 preserves which are handmade using traditional open pans in their base in Hawkshead village, all without any added flavourings, colourings or preservatives.

For something a little bit spicier, there’s also Mr Vikkis Indian fusion chilli sauces which are made up in Carlisle!

Another famous Lake District export is the world-famous Cartmel Sticky Toffee Pudding, sold from the local village shop, where you can also pick up a range of other puddings, crumbles and sauces too.

The Coniston Country Kitchen Larder are famous for their gingerbread and Christmas puddings, using recipes which have been passed down throughout four generations, which they’ve been supplying local farm shops with for over 30 years now.

Kendal is probably most famous for its Mint Cake, perhaps best known for being eaten by Sir Edmund Hillary as they completed the first successful ascent of Mount Everest in 1953.

Romney’s have been producing the sweet snack for over a hundred years, with the business remaining in the same family ever since it was founded.

The area is also home to a number of successful chocolatiers, such as the Grasmere Chocolate Cottage, who craft hand make Lakeland Chocolates using the very best Belgian chocolate couverture, as well special ingredients such as Baileys Irish Cream and Marc de Champagne.

John Watt and Son are Carlisle’s oldest coffee roasters, having been established way back in 1865.

They roast their own 100% coffee at their premises in Carlisle, as well as sourcing ingredients direct from local farmers, and also have four of their own cafes across the county too.

In Kendal, you have Farrer’s Tea and Coffee Merchants, who have been roasting their fresh artisan coffee in the town for over 200 years, making them one of the oldest roasters in the country, while in Coniston, in the heart of the Lakes, you’ll find Red Bank, which was set up after founder Tom packed in his job as a lawyer in London to move to the Lake District and fulfil his dream!

If you’re looking to book a foodie trip to the Lakes, be sure to check our availability here at Craig Manor Hotel, where you can also enjoy a delicious meal in The Craig Manor Kitchen, with fantastic views over the lake.